Looking to automate some of the processes you use regularly in Final Fantasy XIV? Here's how to get started.

Macros can be a really useful way to connect multiple commands to a single command or button press. However, they can also be extremely confusing, especially for new players. While macros are readily available in Final Fantasy XIV, they aren’t always the best way to approach inputting multiple commands. Instead, you should always take into account the type of macro that you’re trying to create, as well as what you intend to use it for.

While macros can definitely improve the usability of some things in FFXIV, they aren’t super effective in combat. We’ll touch on that a bit further down, but it is something to keep in mind when first introducing yourself to macros in Square Enix’s hit MMO. But first, let’s start with the basics.

What are macros in Final Fantasy XIV? 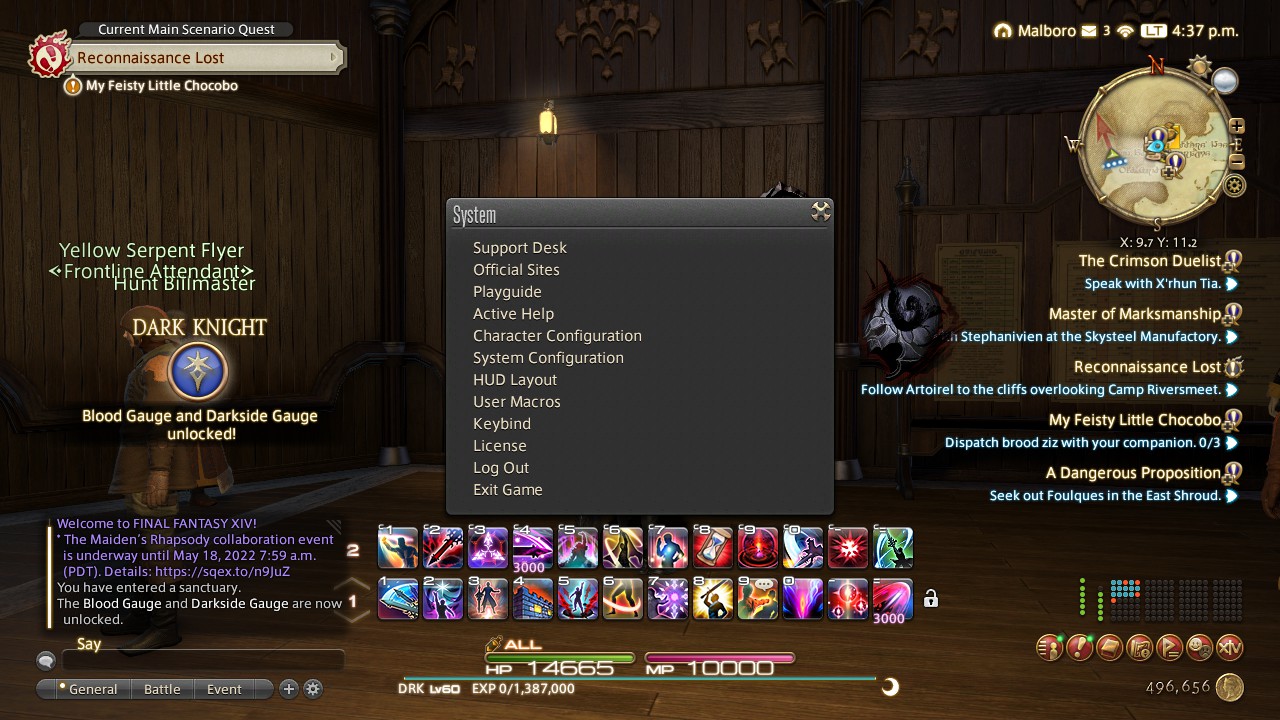 At their most basic level, macros in FF14 are exactly what you’d expect. They’re a way to automate some processes in the game--whether that’s automating opening a certain window, removing the game’s HUD, or even stringing together multiple chat messages to be sent at a given time.

You can manage macros at any time through the User Macros window in your game’s System settings. This is where you’ll create, access, and save your macros. It’s also where you can come for a refresher if you ever need it. One thing to keep in mind is that macros in FF14 are placed on the game’s hotbar. This allows you to easily activate those commands just like you would any other skill or system in the game.

How to create a macro in Final Fantasy XIV

You will create a macro using text commands. These can easily be found at any time by clicking the Text Commands button in the bottom right-hand corner of the User Macros window. There are a lot of commands here, which is why I’ll be focusing on just a few for the purpose of this guide.

Each macro will utilize 15 lines. This might feel limiting, but it should be more than enough to actually create most of the macros you plan to use.

First, you need to choose an image for your macro. By default, the game gives you a list of options to choose from. However, if you don’t like those, and you want something that’s already in the game, you can change the icon by typing this line into the macro: /micon “icon name” [ category ] (minus spaces).

For example, if you wanted to set up a macro for the fist bump emote, but you wanted to select that specific icon, you would type /micon fistbump emote into the macro. If you’re setting up a macro for a combat, crafting, or gathering job, though, you do not need to include the category, as the macro system automatically determines it needs to be in the [action] category for you.

How to use wait commands to break up macros 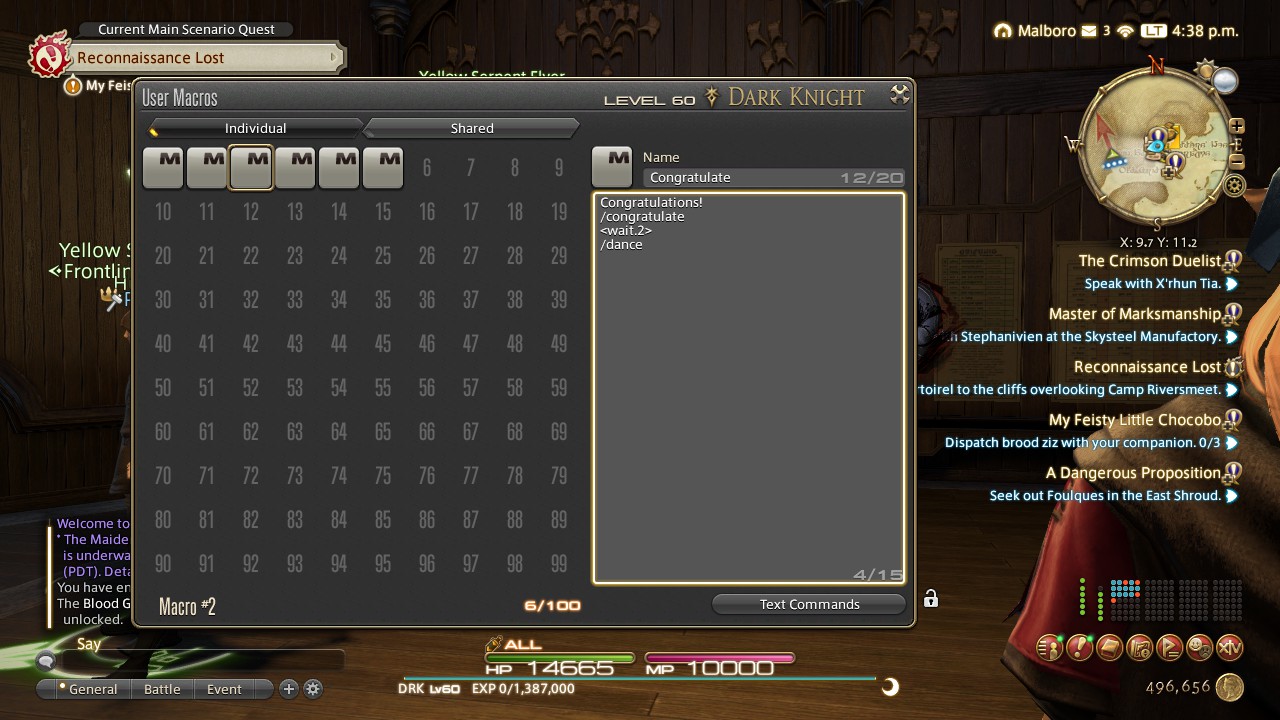 Now that you’ve got an idea of how to create a macro, it’s time to talk about wait commands. Often, the actions that you take within a macro will include a cast time. This is especially true if you’re using combat macros. As such, you can use wait commands to set aside a certain amount of time in between each macro command. This allows you to string multiple actions together without one being ignored because your character is busy.

There is one important thing to remember about wait commands, though. They cannot be broken down into half seconds. So, if you only need to wait 2.5 seconds before issuing another command within your macro, it’s automatically going to round to 3 seconds. This is a huge part of why combat macros aren’t highly recommended within the community.

Why you shouldn’t use combat macros

Okay, now it’s time to talk about the elephant in the room: combat macros. Using macros to automate combat might seem like a smart play. But, as I mentioned above, doing so will cause you to lose out on precious time in between casts. That’s because the global cooldown of skills is 2.5 seconds. However, since wait commands cannot be broken down into half seconds, it will always round up to 3 seconds when you set up a wait command.

Also, the global cooldown may start at 2.5 seconds, but it can often be lower, especially as you level your skills and start equipping gear with modifiers attached to them. So, if you choose to set up a macro that chains three skills together, you could lose out on up to 1 second of time in between casting each skill. At that point, you’re losing upwards of 20 percent of your overall effectiveness in combat by trying to automate the process.

How to use a macro

Once you’ve created your macro and ironed out all the details, it’s time to put it to use. The easiest way to do so is to set it up on your hotbar. All you really need to do for this is grab the macro from the User Macros window and then drag and drop the icon into a slot on your hotbar.

At this point, you can activate the macro like you would any other skill, by pressing the associated hotbar slot. This makes it easy to set up entire hotbars with different macros that you might use often.

Now that you’re well-equipped with the knowledge of how to create macros and how to use them, you can become a better player and a more reliable teammate. You can assign hotbar buttons to the keyboard or you can set your in-game hotbars to mimic the same layout a particular mouse may use as well, such as the Aerox 9 Wireless mouse, which is crafted with a variety of buttons specifically for MMOs like Final Fantasy XIV.

Either way, these are some of the first steps to get you going so you can automate some of the more involved processes that go along with pulling off more complicated actions in Final Fantasy XIV. Have a great time exploring Eorzea!